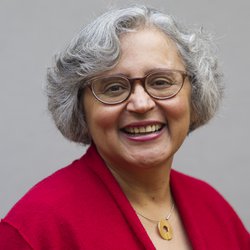 Cecilia A. Conrad, Ph.D. is CEO of Lever for Change, a member of the Board of Directors - Ex Officio, and a Senior Advisor at the John D. and Catherine T. MacArthur Foundation.

Dr. Conrad was formerly a Managing Director at the Foundation, where she led the MacArthur Fellows program and steered the cross-Foundation team that created MacArthur’s 100&Change—an athematic, open call competition that periodically makes a single $100 million grant to help solve a critical problem of our time. She continues to manage the 100&Change competition.

Before joining the Foundation in January 2013, Conrad had a distinguished career as both a professor and an administrator at Pomona College in Claremont, CA. She held the Stedman Sumner Chair in Economics and is currently a Professor of Economics, Emerita. She served as Associate Dean of the College (2004-2007), as Vice President for Academic Affairs and Dean of the College (2009-2012), and as Acting President (Fall 2012). From 2007-2009, she was interim Vice President and Dean of the Faculty at Scripps College.

As Associate Dean and Vice President for Academic Affairs at Pomona, Conrad championed the College's summer undergraduate research program and expanded it to the arts and humanities, led conversations regarding the value and assessment of a liberal arts college education, nurtured collaborations between the arts and the sciences, and worked with academic departments to improve the campus climate for diversity.

As a member of the faculty, Conrad contributed to the curriculum of several interdisciplinary programs and, in 2002, was recognized as California's Carnegie Professor of the Year, a prestigious national award that recognizes faculty members for their achievement as undergraduate professors. Conrad's academic research focuses on the effects of race and gender on economic status. Her work has appeared in both academic journals and nonacademic publications including The American Prospect and Black Enterprise.

Before joining the faculty at Pomona College, Conrad served on the faculties of Barnard College and Duke University. She was also an economist at the Federal Trade Commission and a visiting scholar at The Joint Center for Political and Economic Studies.

Conrad is a member of the board of trustees of Bryn Mawr College, The Poetry Foundation, the National Academy of Social Insurance, IES Study Abroad, and the African Center for Economic Transformation. She is a member of the TIAA Board of Governors and of the 2021-2023 Generosity Commission.

Conrad received the National Urban League’s Women of Power Award in 2008 and the National Economic Association’s Samuel Z. Westerfield award in 2018. She has honorary doctorates from Claremont Graduate University and the University of Massachusetts Dartmouth.

Conrad received her Bachelor of Arts degree from Wellesley College and her Ph.D. in economics from Stanford University.