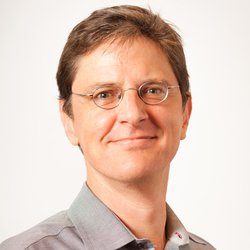 Jeff manages the information collected via Lever for Change competitions and works with cooperating organizations to make this information useful and publicly available. Jeff joined the MacArthur Foundation in 2011 to build what became the Discovery grants program and has since worked in the Foundation's American Democracy, Philanthropy, and 100&Change programs.

Previous to his time at MacArthur, Jeff worked for organizations focused on digital media and innovation, including UC Berkeley’s School of Information Management and Systems, the Internet Archive, the Netherlands Institute of Sound and Vision, and the Preserving Digital Public Television Project at Thirteen/WNET. In the 1990s, Jeff worked as a journalist covering new technology, and co-founded a Silicon Valley startup, Omniva, which was funded by venture capital firm Kleiner Perkins.  Jeff attended New College in Sarasota, Florida for undergraduate studies, and as joint inventor, has five U.S. patents related to information management.

Jeff is a frequent public speaker, and has published in the Stanford Social Innovation Review, The Nation, First Monday, the Journal of Digital Information, and other journals, summarized at .ubois.com. He currently serves on the boards of the Kahle/Austin Foundation, which supports access to digital information; Humanity 2050, which explores challenges of complexity and the human future; and QuestionCopyright.org, a Chicago-based organization supporting free culture and expression.