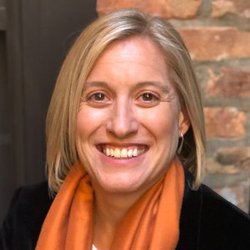 Kristen Molyneaux serves as the Vice President of Program Strategy and Learning at Lever for Change, a nonprofit affiliate of the John D. and Catherine T. MacArthur Foundation that emboldens donors and problem solvers to think big and leverage investments in effective solutions to accelerate social change. In this role, she oversees the Award Management and Social Impact teams at Lever for Change, as well as the organization’s learning agenda and Bold Solutions Network.

Previously, Kristen was the Senior Program Officer for MacArthur Foundation’s 100&Change initiative, a competition for a single $100 million grant to help solve a critical problem of our time. In this role, Kristen co-developed, designed, and launched the inaugural 100&Change competition. Kristen also oversees the MacArthur Foundation’s $100 million investment in Sesame Workshop and the International Rescue Committee and its $15 million investment in NEST 360.

Kristen joined the MacArthur Foundation in 2013 as a Program Officer in the Girls' Secondary Education in Developing Countries program where she oversaw the strategic trajectory of the portfolio and played a critical leadership role in forming the Partnership to Strengthen Innovation and Practice in Secondary Education (PSIPSE) donor collaborative. Prior to joining the Foundation, she was a Program Officer at the Firelight Foundation, leading the organization’s investments in early childhood and primary education.

Kristen is a Grants Advisory Committee Member for the We Mean Business Coalition. Kristen also serves on the Executive Committee for MSI’s Scaling-Up Community of Practice and is a member of the Funders Coordinating Committee for ­NEST 360.

After obtaining her B.S. degree from State University of New York at Oswego and M.S. from Florida State University, Kristen obtained her Ph.D. in Educational Policy Studies—Comparative International Education from the University of Wisconsin-Madison. She was a post-doctoral research fellow at Florida State University where she taught graduate courses and published articles on the importance of role models for young women interested in pursuing STEM related careers. Kristen served as a United States Peace Corps Volunteer in Uganda and Cape Verde.